A good 3D printer is a highly capable machine that can help you in making versatile designs. With a lot of competition in the market, there comes a huge challenge to choose the best 3D printer model for you.

Among all, Creality has always provided users with a wide variety of 3D printers that you can choose from, such as the Creality CR-10s.

Having said that, Creality is not the only one in the market; TEVO is another such company that makes compatible 3D printers such as the TEVO Tornado.

Both of these printers have a lot in common. Deciding which one to get can be a difficult task. Not only the beginners but also sometimes professionals find it hard to choose one between the two.

For that reason, we have come up with an article to talk about TEVO Tornado vs. Creality cr-10s, where you will see the main functionality of both the printers and at the end, you will be able to distinguish between them.

Let us take a deeper look into their specifications so you can decide which one is the best 3D printer for you! 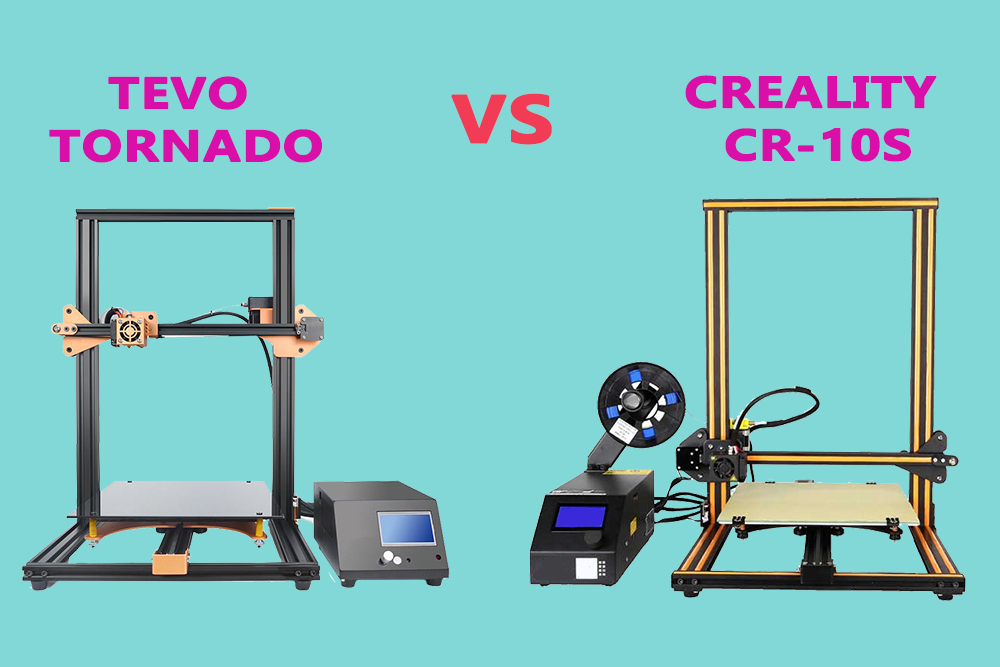 Creality CR-10s can be called a more improved version of the Creality CR-10. It offers some new features, which the standard CR-10 does not. Are those new features worth getting the CR-10s or not? Let us find out.

The CR-10s offers another rod for the z-axis, which makes sure that there is little to no instability in the design. This results in better z-axis.

Unlike the old models, including the CR-10, the CR-10s has spectacular consistency. This consistency helps in making taller designs with increased ease and no wobbles, resulting in the print with a highly increased build quality.

There is a power recovery mode in the CR-10s, meaning that if the power is lost during the 3D printing process, the CR-10s will resume the printing when power is turned on back again.

No progress is lost during this power, and the hassle of reprinting a model is eliminated, unlikely in the case of CR-10.

This is an important feature as you might run out of filament in previous models but not get any indication, which might end up in your print being left-off half completed.

Creality CR-10s offers a heated bed on which you can experiment with several different materials. The bed can heat up to 100°C, but it might take a long time to do so.

Although the heated glass bed is quite stable and does the job, it might result in a wobbling of prints sometimes. Other than that, it might also have non-stick issues with the print see also Calibrate Creality Ender 3.

Due to this, the CR-10s comes with a removable glass bed that you can easily take off in order to remove your print.

The Creality CR-10s is a powerful 3D printer with a large bulk. If you can handle the bulk size of the 3D printer and are willing to give it the time to heat up, it can help you create numerous fine pieces of prints at an excellent price point.

The TEVO Tornado comes 95% assembled in the box, requiring minimum effort in the assembly process. But then again, is it worthy of being called a competitor to the Creality CR-10s? Let us find out.

The TEVO Tornado has the same build volume as the CR-10s, which is 300 x 300 x 400 mm. It helps in making larger prints with no compromise on accuracy and quality on the print.

The lead screw is one of the most important features of the TEVO Tornado. The lead screw helps to maintain stability as it is fixed on the x-axis as well as the y-axis.

For the designs that take up all the 400 mm height of the printer, the x-axis and y-axis can be adjusted by fixing the lead nuts.

The use of AC voltage in the heat bed of the TEVO Tornado helps the heat bed to heat up more quickly than the other models of 3D printers. It heats up in approximately 3 minutes or even lesser time.

Assembling the 3D printers is a hectic task usually. However, with the TEVO Tornado, this is not the case.

The assembly process of the TEVO Tornado is quite simple, as it does not require a large number of tools, and as mentioned earlier, it comes partially assembled. A variety of tools such as Allen wrench and scrappers also come in the box.

One of the major advantages of the TEVO Tornado is that its print quality is exceptional. As long as the suitable filament is installed, you will get some highly accurate and precise prints with fine quality.

The TEVO Tornado can work with a number of filaments such as PLA, PLA+, PETG, TPU and ABS.

Which One Should You Choose?

Considering the features of both the models, it is certainly very hard to choose between them. Let us compare some of the important features of the two.

The Creality CR-10s and the TEVO Tornado are very similar machines. One of the major points to consider is the build plate of the two 3D printers.

As the build surface of the TEVO Tornado is plastic-based, it can be difficult to remove the final print from the plate. In the case of Creality CR-100s, it is not a problem due to the glass-based print surface.

If we talk about the heating process, the TEVO Tornado is essentially a better product than the Creality CR-100s as it heats up rather quickly.

When we talk about printing speed, both of these printers work well at a lower speed, and the quality of the print reduces if you increase it after a certain limit.

Another one of the plus points of CR-10s is the filament runout detector; it will inform the user when the filament is finished.

One more thing is that both of the 3D printers are easy to assemble, yet TEVO Tornado requires less amount of time when compared to Creality CR-10.

Conclusion
At the end of the day, it all comes down to your personal preference. If you prefer making large prints without having to worry about the filament running out, CR-10s is the one for you.

On the other hand, if you prefer precision and smoothness in your prints, the TEVO Tornado might be the one you want to purchase.