With technological breakthroughs over many years, we have invented machines that make our daily lives much easier than they used to be.

The emerging technology these days is 3D printing technology. 3D printers print 3-dimensional products based on files saved in USB or a computer.

Creality has always been one of the advanced 3D printer companies with 3D printers of various versions. Printers introduced by Creality are well known for their optimum performance and reliability.

No doubt, among all, the best-known models of Creality are Creality Ender 5 and Creality Ender 3. Many people find it hard to distinguish between the two, especially when they purchase one for themselves.

For that reason, here in this article, we are going to talk about Creality ender 3 vs. ender 5 from the aspect of features and qualities, it will help you in knowing the difference between them, and you will be able to decide the best printer for your need and requirement. 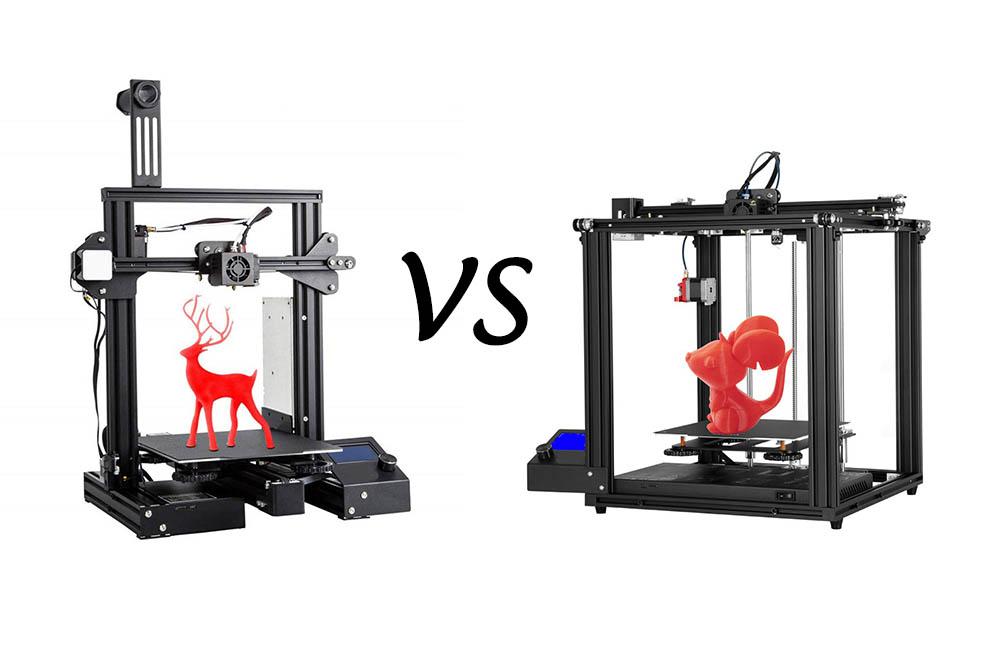 Ender 3 is one of the most-selling printers of this brand. It stands out due to a significantly lower price than the other 3D printers available in the market.

However, there is no printer out there at this price that delivers quality as good as the Ender 3 that uses the FDM technology.

Although a few modifications are required, and the assembly procedure takes a long time, it is easier to use and is preferred for beginners.

What are the specifications?

It possesses advanced features and specifications that help you in achieving the best quality print at the end. Some of the main characteristics of ender 3 are mentioned below.

The Ender 3 has a few features that you can only expect in the models with a relatively higher price, such as the build volume of 8.7 by 8.7 by 9.8 inches. This is a great build volume for a 3D printer at this price.

Another unique feature of the Ender 3 is that you can resume printing where you left off, even if the power is lost. With this feature, you save not only time but also the filament material and cost.

The open-source system is a feature of the Ender 3, which makes modifications easier. It lets you replace the components, which can result in increased print quality.

During the printing process, the temperature can rise to a dangerously high level. Ender 3 comes with thermal runaway protection, which ensures that the temperature is at a tolerable degree.

It is an important feature in terms of safety and reliability.

The Ender 3 has a tight filament path, which means you can use many flexible filaments. When modified, the filament works even more efficiently.

After looking at all the unique specs of the Creality Ender 3, it can be said that it is one of the most affordable 3D printers with unlimited upgrades possible.

It is capable of producing high-quality products and is a perfect wallet-friendly machine.

Creality Ender 5 is a relatively better version of its predecessor, the Ender 3 pro. It delivers the results in lesser time with no effect on the final quality of the product.

It is highly upgradable, which results in even better prints. As a matter of fact, the features will be improved in ender 5 as compared to ender 3.

What are the specifications?

Creality Ender 5 is an advanced version and, therefore, has some distinct and improved features, some of which are mentioned below.

The Ender 3 offers a larger build volume than the previous models, 8.7 by 8.7 by 11.8 inches. The increase in build volume means that larger outputs can be printed.

Unlike the other models, the Ender 5 comes with a clear instruction guide, with the help of which you can assemble your Ender 5 in less than 30 minutes. On the other hand, assembling ender 3 requires a bit of effort.

When assembled properly, the Ender 5 forms a rigid open structure, which helps in preventing the hotbed collide with the frame. This further improves the reliability of the printer.

By making a few modifications to the Ender 5, the quality of the product can significantly be enhanced.

These modifications can be installing a tempered glass bed, PEI magnetic build plate, and a silent mainboard. It is easier to modify ender 5 as compared to other versions of Creality 3D printers.

To reduce clogging and filament jams, the Ender 5 comes with a relatively better hot end than the Ender 3, which is MK10 compared with the MK8 in Ender 3.

Which one is better?

While both models are powerful machines, there are some major differences between the two.

The most important one being the build volume. As we now know that, the Ender 5 has a larger build volume, and thus it can produce larger prints and can be more stable during the process.

Another distinguishable feature between the two is the assembly process. Ender 5 comes with a clear instructions book while assembling the Ender 3 can be a time-taking and frustrating process.

The Ender 3 definitely comes with an assembling manual, but it is not found to be user-friendly, in addition to missing steps.

The Creality MK10 Hot end used in the Ender 5 reduces the risks of clogging and filament jams. The Ender 5 is not ahead of the Ender 3 in every aspect, as the thermal runaway protection is present in the latter, which helps maintain the temperature.

The Ender 5 has Y-axis and Z-axis motors, which result in a smoother flow movement, but the Ender 3 moves only along the X-axis.

The low cost of Ender 3 enables the buyer to purchase external modifications, which can improve the quality of the prints.

Conclusion
Keeping in mind the specifications of both Ender 5 and Ender 3, we must consider that none of the printers is a bad choice.
Ender 5 may offer a large build volume, but the Ender 3 is cost-efficient and offers more room for modifications.

The kind of work and projects you are going to do also determines which 3D printer you should choose.

As a result, if you are on a low budget and like to do modifications on your 3D printer, go for the compact-sized and cost-efficient Ender 3.
But if you want a more stable and reliable 3D printer that you can assemble easily using about 20 screws in 20-30 minutes, choose the Ender 5.